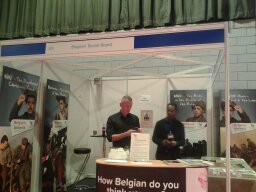 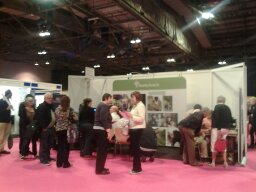 It was really cold in London last week end but spirits were high at 2013 edition of Who Do You Think You Are?Live exhibition where thousands gathered in order to learn more about their ancestors,poors and riches,humbles or nobles,soldiers or civilians or to hear some of the very interesting talks that were organised.

It was also a time to meet fellow genealogists and exchange latest news and informations.

This year, Migration Zone and along with my neighbours : FIBIS, anglo-german,anglo-italian and an association with carribeans ancestors,I was able to help people with ancestors abroad or coming from abroad !One of my best memories of this year edition,if not the very best, is to have helped connecting cousins who didn’t know about each other before prior to their visit to the show !

Following a contact I had with her last year in London, I had help a lady from with her potters ancestors who at some point came to work in Jemappes (Hainaut Province,Belgium) and this very nice Lady came to say hello this year so when a couple came to ask for help with a search in Jemappes two hours or so later , I was quite amused and of course could already tell them about what I knew of this small Brits-potters in Belgium.

I first thought that the person this couple was looking for could have been one of the co-workers of the family I previously worked on (That would have make sense) but to my,and theirs,great surprise, they were also after the same family, the man even bearing their surname ! Unfortunately the Lady I had help,and who proved to be a relative of the couple, was already gone but addresses were soon exchanged and I heard they had a long chat the very same week end of the show and I can’t wait to see a pic of them united !
I just can’t wait to start again next year !

Just got back from the London most important genealogy exhibition ! My impressions and pictures soon but just to say that I really enjoyed the show,met great and nice people, discussed about interesting,and very interesting, cases, solved some even so I’m really glad for that !

More about it really soon !